There are many benefits to combining these two technologies, which provide complementary data about your sample. This includes detailed information about nanoscale properties and composition. In addition, TERS provides chemical information on the nanometer scale.

Blue Scientific is the official distributor of Bruker AFM and combined AFM-Raman systems from Bruker and Renishaw in the Nordic region (Finland, Denmark, Norway and Sweden). If you have any questions or would like a quote or demonstration, please get in touch:

Surface Analysis with AFM and Raman

In atomic force microscopy, a sharp tip is brought into close proximity with the sample and held at that distance using a force-based feedback loop. You can then measure:

By taking measurements sequentially at discrete locations, 3D images of sample properties can be created. This information is extremely valuable, but lacks the chemical specificity of vibrational spectroscopy.

Spectroscopy involves the interaction of electromagnetic radiation with matter. Raman spectroscopy is a vibrational technique, in which energy is used to excite molecular or lattice vibrations. The sample is illuminated with monochromatic light, and the inelastically scattered light is detected.

As a direct probe of the vibrational structure, Raman is widely applicable as a specific probe of chemical composition and symmetry. This is especially useful for studying bio-materials because, unlike fluorescence, it does not require sample labeling.

The limitation of Raman spectroscopy is that the cross-section is fairly small. Only one in a million photons interacting with a sample will be inelastically scattered and exhibit a Raman shift. To obtain sufficient signal for analysis, acquisition times of several tens of seconds per location are needed. This spatial resolution is improved by combining AFM and Raman spectroscopy. 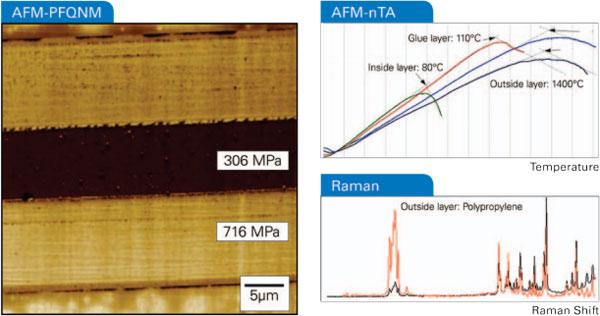 Cross section of food packaging measured with Atomic Force Microscopy and Raman. This provides information about composition and shape, as well as other properties such as nanomechanical and thermal property maps.

The full synergistic effect of AFM and optical spectroscopy comes into force when the AFM tip is tasked with “becoming the light source.” The end radius of an AFM tip is less than 20nm, which is far smaller than conventional diffraction limit spot sizes. This delivers 30-50 times higher spatial resolution.

Tip-enhanced spectroscopies such as TERS open up a whole new field of research. As well as higher spatial resolution, sensitivity to surface features is enhanced. TERS is similar to conventional Raman spectroscopy, but yields more than just the same information on a smaller length scale.

Applications are not limited to these examples; if you have any queries about whether AFM-Raman would be suitable for your research, please get in touch.

The images below show a semiconductor structure with partially buried silicon. The sample topography acquired by atomic force microscopy shows structures of different physical dimensions, but lacks chemical information. The Raman map on the right provides chemical information, based on integration of the silicon peak at 520cm-1. The areas in red, yellow and green are exposed silicon.

AFM and Raman are often used to study the material properties of graphene and carbon nanotubes. Combining quantitative nanomechanical measurements (QNM) and Raman spectroscopy enables a better understanding of these materials. The number of layers can be measured, and the disorder of the lattice can be determined.

Below are AFM and Raman images of the G and D-band of a graphene flake on silicon oxide. The data correlates to unambiguously reveal the layered structure and a step height of 300pm between layers. The D-band image shows an area of increased defects along the edge of the single portion of the sample.

AFM topography (left) and Raman images of the G (middle) and D-band (right) of a graphene flake on silicon. Both Raman and AFM confirm the layered structure with 300pm step height separating layers. The Raman image of the D-band suggests an increased density of defects along the edge of the single layer. Image width 15µm.

The circled area in the image above was then analysed further using the QNM capabilities of the AFM. The image below shows four channels (topography, adhesion, modulus and deformation) of QNM data from a 2.5µm scan size. The topographic map shows wrinkle-like structures. These structures show softer compliance and reduced adhesion compared to the undisturbed portion of the layer. The deformation channel also demonstrates a larger deformation on the graphene flake when compared to the substrate. This indicates that the graphene flake does not mechanically relax during the sub-millisecond contact time of the QNM measurement.

By combining AFM and Raman, features such as these can be found and identified easily, and their mechanical behaviour can be investigated in detail. 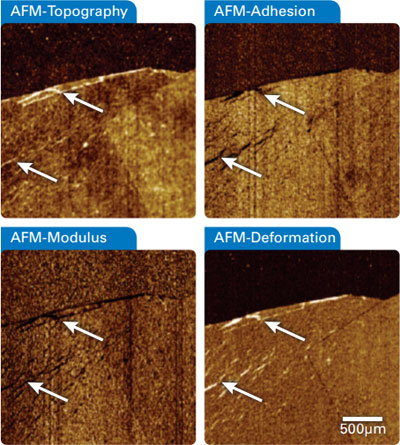 Simultaneously recorded quantitative nanomechanical AFM
data of a single and double layer on a graphene flake. The wrinkles
in the topography (top left) are strongly reflected in the mechanical property channels as being softer (bottom left) with less adhesion (top right) than the surrounding material. The deformation channel (bottom right) shows a strong plastic deformation of the graphene layers, which do not relax during the sub-millisecond contact time with the AFM probe. Image size 2.5µm.

Stress in materials can affect device functionality and is therefore an important parameter to know and control. Raman scattering is a good technique for measuring stress in silicon devices. Usually the diffraction limit restricts these measurements to 1µm lateral resolution. However, with TERS, the measurement range is extended resolutions in the order of a few nano-meters.  This opens the door to further studies and a variety of applications on silicon devices.

In the example below, a device consisting of a 70nm layer of strained silicon residing on top of an ultrathin barrier layer of BaOx followed by bulk Si. As the TERS tip approaches the sample was measured. The increased signal from the strained Si-layer upon tip approach is demonstrated is clearly shown. 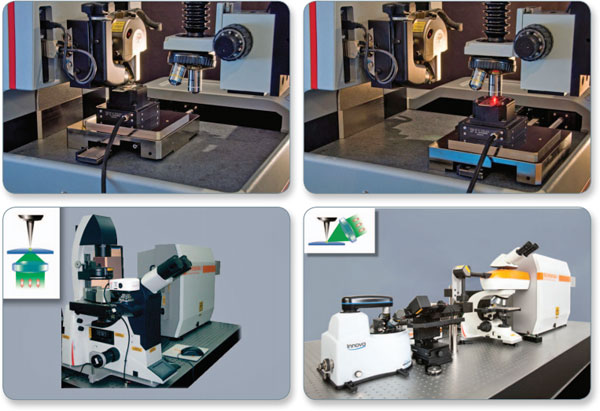 Top: Sample stage and optics arm of the Raman microscope for co-located AFM-Raman. The stage shuttles the sample between the AFM head (left) and the Raman objective (right). The red spot is the Raman laser illuminating the sample. Bottom: Correlated TERS and Raman systems with instruments from Bruker and Renishaw, available from Blue Scientific.

Blue Scientific is an official distributor of Bruker AFM and combined AFM-Raman systems from Bruker and Renishaw in the Scandinavia (Sweden, Finland, Denmark and Norway). If you have any questions or would like a quote or demonstration, please get in touch: